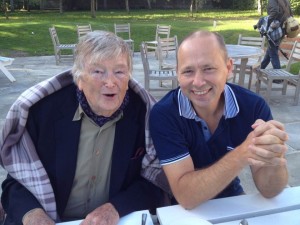 This photograph is Ben Dunk and me at West Dean Garden restaurant, exchanging memories of our childhood in West Dean. Ben has written and published his memoirs online at http://www.dunkantix.com/secrets/TOC.html

When I began writing the Cat Competition, I realised that although I’d lived there three separate times in my life I needed more information to make my story specific to West Dean and not just any village. I wanted it to have a historical setting, with characters authentic to the landscape, culture and period.

My search for a book on West Dean at the local library proved fruitless.  So many Sussex villages have wonderful personal accounts that a resident has lovingly prepared, but no one it seemed had written one for West Dean.

I’d spent a whole day in Chichester library, including the reference section and the Records office and almost given up hope.  Fortunately, an internet search rewarded my continued efforts.  I found Ben Dunk’s memoirs, over 60,000 words, with wonderful stories and photographs of his early life living in West Dean.  Two days later I’d read his biography and marvelled that I had gained such detailed knowledge.  It is a rich description of his childhood in a small Sussex village, in the 1930s. Where the villages everyday lives were enmeshed with the affairs of the big stately house, which in those years attracted royal visitors.

His account is captivating. Writing in his eighties Ben had the benefit of seeing his childhood with a great deal of perspective. Also, now that he’s lived in the United States for so long, he has developed a sensitivity for the nuances of English rural culture that could only come from coming away from that community.

Before I’d even finished reading the biography, I wanted to get hold of the author.  How often have we wanted to do that in our lives and found a contact address difficult to obtain?  But Ben had listed his email address on his website and soon we were in contact.
I think initially Ben was wary of my request for information on the pets and people of West Dean, maybe I presented as somewhat crazy, wanting to write stories of people’s love for their cats?  But eventually Ben and I corresponded freely.

A few weeks later I had a great idea, Ben would be the perfect hero for the Cat Competition. I asked his permission to fictionalise his character promising he would be one of the good guys and so Ben came to appear in over half of the chapters of the book.

The picture above shows Ben and my meeting at West Dean gardens. Ben threw a big party to celebrate his holiday in England. It was a wonderful sunny afternoon, and I finally got to meet Ben and his family.  It was interesting to hear his family were still intimately connected with West Dean, Ben’s son teaches photography at West Dean College.  www.benjamingraham.co.uk

There is an interesting difference between Ben and my approaches to writing.  Ben is very earnest in capturing historical fact and explaining the relevance of real life events.  My writing is all about the story and I’m afraid I will ignore historical fact if the story is better for it.  But the more I got to know Ben, the more the characters I’d written came alive with the result that I became worried that the reader would think the people and events of my story were factually correct.  Initially I’d plundered Ben’s memoir and West Dean’s grave yard for the real names to use in my story, only to later go back and strip them out again.  I didn’t want to misrepresent any of these people’s lives.  The turning point had come when I explained to Ben I’d used his mother’s name to be the character running the pub.  He explained she would cringe at that as she didn’t approve of such places.  And so the moral of this story is that to fictionalise history brings with it responsibility and it may be easier to make a story entirely fictional.  My overriding feeling, however, is that the Ben I met, or a younger version anyway, could have easily have been the little boy in the story, the hero of The Cat Competition.