Author of Films and Fathers, One Last Cruise, The Cat Competition and The Angel of Eddystone
Home » Blog » Murder: Horror Flash Fiction Stories

I entered a short story competition last year, let’s call it micro fiction. Writing limit, 350 words. One of my stories was chosen to be included in a compilation that was published on Amazon by Mary Papas. There was some prize money! But best of all, I had some fun. The drawings are by Ravenfeller, who you can find on fiver.com! 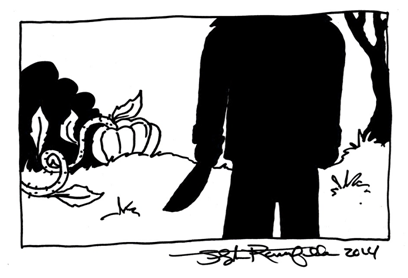 My Mum Said Be Careful, Not Everyone is Nice

We called him Mack. Mack the marrow.  I remember when we went to the store where we found him in his packet. We laid him down in the soil, in his little bed, a tiny seed.  We watered him. We fed him.  Uncle Brian plucked off his side shoots, “to make him a bigin”. His skin was yellowy brown like Grandpa’s, but it was smooth like mine.  We used to go down to the end of the garden and say ‘hello’.  Uncle talked to all of his plants, even though they never said anything back of course.  He said they grew better like that.
Mack was connected to the ground by his thick arm, they said it was more of an umbilical cord.  That’s how Mack got all his nutrients, which is what I need too.  In the storm Uncle Brian had gone out with a carpet to protect him. At the end of the summer, just before they told me I’d have to go to school, he was bigger than the size of my brother when he popped out of my mum’s tummy.
That’s when I saw my uncle do it. I saw him with his knife.  The look on his face.  He had no fear, just cut the cord like it was nothing.  He put Mack in the wheelbarrow. His lifeless round body just flopped in. Just like when they buried Bark, our Labrador.  They took him to his grave in a wheelbarrow.  But they didn’t bury Mack.  I saw Aunt Maggie cut him open.  All his insides smelt really bad.  She was smiling like it was nothing.  Then they tried to make me eat him, like that was normal.  They put him in a pie. I tried to.  They were cross because I wouldn’t. I threw up. I couldn’t do it.
I’d always liked Uncle Brian and Aunt Maggie.  I always wanted to stay over, but I’ve told Mum and Dad now, “I ain’t ever going back there.” Not now I know our Uncle Brian’s a murderer. 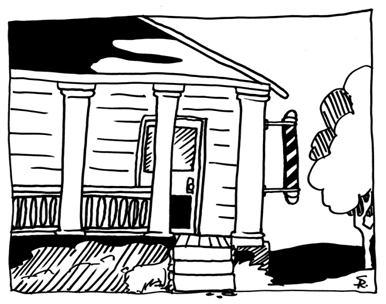 Simon had seen the old barber’s shop sign from the busy high street, tucked away at the end of a quiet road. It was a converted house. Perhaps the barber lived above. It was cheap. A fiver all in! Simon pushed on the door, a bell clanged above him. It was empty. He waited. The seat was old, possibly 1950s, red leather, chrome frame. Footsteps moved in the room above him.
There wasn’t a door from the shop to the house, just long ribbons that hung from the door frame, seventies style. They parted with the head of a large man stepping through. Potbellied, his t-shirt too small. He didn’t say hello, just looked at him, for a second too long. Heswivelled the chair and drew back his hand. Simon sat down. The barber swivelled him back around again. Simon saw the man looking down on him in the mirror. Still no chit chat. He pulled the drape over Simon, and tucked it in tight. Tying it at the back.
“You’ve seen Sweeney Todd, have you?”the barber asked, holding his gaze in the mirror.
“The film?”
“Crazy, wasn’t it, an easy murder. Gets you thinking, doesn’t it?” The barber surveyed Simon’s hair and the neckline. “How realistic do you think it was? It was quiet, they could have got away with it.” He picked up his razor. Straight style. The sun found the long blade and sparkled.Simon felt a bead of sweat on his forehead.
“Just a trim for me today, please.”
“A quick cut?” The fat man began to sharpen it along his leather strop.
“Er, yeah. Just a hair…..dressing.”
“Oh!” he stared at him, “You knew my daughter.”
“Er, did I?”
“Yeah, Sandra.”
“Sandra?”
“Yeah, we met the night you took her out.” He was still holding the razor.
“No, not Sandra.”
“Oh!” His face dropped. “But you’re David, yeah?”
“No! Simon! I’m Simon.”
“Oh!” He went to put down the razor back in its pot. “But we’ve met before?”
“No! I, I’ve never been here before.”
“Oh!” He picked up the scissors. “Just a haircut for you,then?”
“Great!” 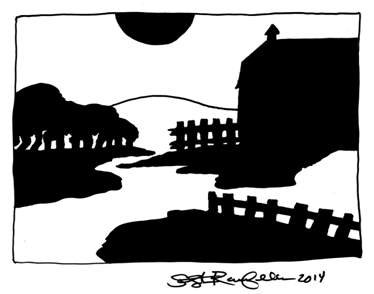 The Smell of Conspiracy

The two old timers had found a quiet spot to talk.
“You’re not looking yourself, my friend.  Are you alright?”
“Things just don’t seem to be getting any better,” the fat one said, “I’m beginning to lose hope.” He scratched his belly.  “I just don’t want to go on like this, month after month, not knowing if we’ll be here tomorrow.”
“You’re right!” the hairy one squeaked.  “We need some change.  These living conditions are intolerable.”
The fat one took a huge bite and then said with his mouth still full, “He’s such a typical ugly man, his filthy wife is hardly any better.”  Food fell from his mouth as he chewed.
“What can you expect from such a barbaric example of his species? He’s up to no good. I reckon it was him that took the youngsters.” The fat one grunted in agreement. “I think he’s planning to do us in too.  There’s folk been disappearing from here for generations and he’s the most likely suspect.”
“Yeah, and just look at the rubbish he feeds us, always someone’s left overs. I say we do him in before he does us.”
“What, murder!” he snorted, “How?”
“We’ll just eat him! Between us all we’ll have him done in less than ten minutes.  The only difficult bit is the head. But if your grab it in your jaw and slam it against a wall, it’ll break up eventually.  If they throw in a rabbit, Uncle Babe is through its skull in seconds.”
“Yeah but …,” he contemplated the task, “their heads are a lot bigger.  How will we get him?”
“The next time he comes to feed us with his bucket we’ll all charge.  Four from the back, four from the front.”
“Ha! Yeah, that would be ironic, eat him as he comes to feed us.” He filled the barn with loud squealing laughter. “You’re a funny pig!”
“Thanks, you’re a great pig too.”